I’ll explain all three in the following sections below, starting with Azure AD Connect.

The latest (current) version of the directory synchronization tool is Microsoft Azure AD Connect. Please note that this is the only officially supported version by Microsoft!

One remark in comparison with previous version of DirSync tools, the Azure AD Connect now synchronizes once every thirty minutes. If you enabled password synchronization, the official SLA mentions a 2 minute timeframe before the password is synchronized, but in a typical environment it is more like 30 seconds or so.

To force an incremental synchronization, open PowerShell on the Directory Synchronization server (or any other server where you installed Azure AD Sync) and execute the following command:

There’s not much to show here though

This tool is configured as a Scheduled Task to run every three hours. You can also open the Scheduled Tasks in Administrative Tools and manually start the task (instead of starting the tool manually).

In Windows 2012 R2 you can import the DirSync module directly in PowerShell using the Import-Module DirSync command. When imported you can run the Start-OnlineCoexistenceSync cmdlet to synchronize your Active Directory with Office 365. 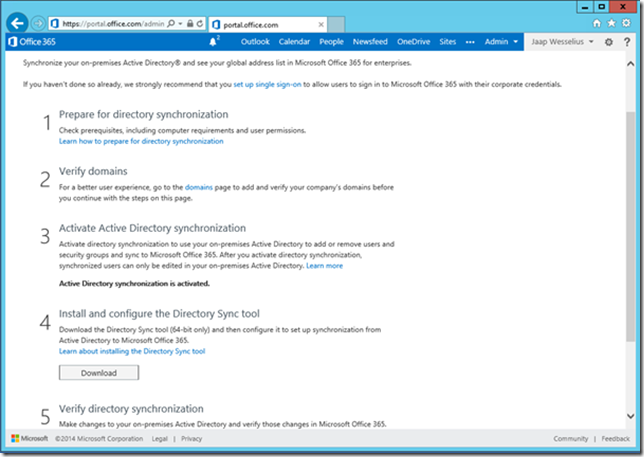 END_OF_DOCUMENT_TOKEN_TO_BE_REPLACED

Bad news for hosters… or as a fellow MVP said ‘another kick in the nuts for hosters’ but at the Worldwide Partner Conference (WPC) 2014 Microsoft announced the end-of-life for Lync Hosting Pack version 2 (which is based on Lync Server 2013). This was already known for some time, but now it’s official.

END_OF_DOCUMENT_TOKEN_TO_BE_REPLACED

For a couple of week one of my customer was complaining about little hickups in their Lync 2013 environment. It was working, but every now and then they had these strange little issues. When I moved my own accounts to Lync Online I was not able to federate with this customer anymore so it was time to start investigating.

END_OF_DOCUMENT_TOKEN_TO_BE_REPLACED

Veeam recently released Patch 4 for Veeam® Backup & Replication™ v7 is now available and contains a host of resolved issues as well as new features and enhancements, including: END_OF_DOCUMENT_TOKEN_TO_BE_REPLACED