When implementing a Database Availability Group (in Exchange 2010 and higher) you need a File Share Witness (FSW). This FSW is located on a Witness Server which can be any domain joined server in your internal network, as long as it is running a supported Operating System. It can be another Exchange server, as long as the Witness Server is not a member of the DAG you are deploying.

A long time ago (I don’t recall exactly, but it could well be around Exchange 2013 SP1) Microsoft started to support using Azure for hosting the Witness server. In this scenario you would host a Virtual Machine in Azure. This VM is a domain joined VM, for which you most likely also host a Domain Controller in Azure, and for connectivity you would need a site-2-site VPN connection to Azure. Not only from your primary datacenter, but also from your secondary datacenter, i.e. a multi-site VPN Connection, as shown in the following picture: 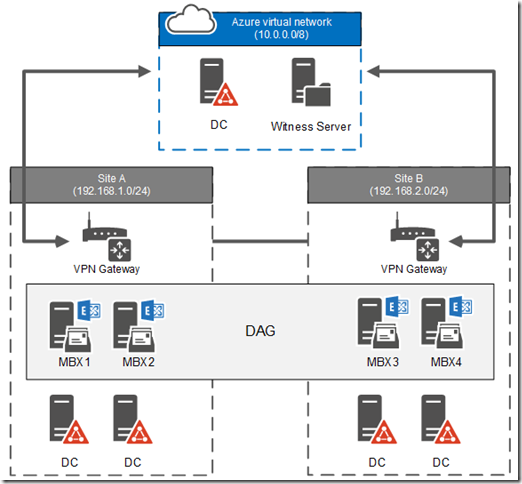 While this is possible and fully supported, it is costly adventure, and personally I haven’t seen any of my customers deploy it yet (although my customers are still interested).

In Windows 2016 the concept of ‘Cloud Witness’ was introduced. The Cloud Witness concept is the same as the Witness server, but instead of using a file share it is using Azure Blob Storage for read/write purposes, which is used as an arbitration point in case of a split-brain situation.

The advantages are obvious:

Unfortunately, this is not a supported scenario at this point. All information you find on the Internet is most likely not officially published by the Microsoft Exchange team. If at one point the Cloud Witness becomes a supported solution for Exchange 2016, you can find it on the Exchange blog. When this happens, I’ll update this page as well.

When you reboot a Mailbox server for example all active copies of Mailbox databases are moved to other Mailbox server but they are never moved back to their original location.

END_OF_DOCUMENT_TOKEN_TO_BE_REPLACED

Microsoft is shifting focus on Load Balancing solutions. During TechEd 2010 in Berlin it was announced that Windows Network Load Balancing (NLB) is no longer recommended (but still supported) and that the recommendation will be to use a hardware load balancer.

Another new recommendation is to use combined Exchange server with all three Server Roles, i.e. Hub Transport, Client Access and Mailbox Server Role when possible.