One of the major changes in 2013 is the new architecture. Exchange 2013 only has two server roles:

Another important thing to remember is the fact that CAS2013 only performs authentication and proxy/redirection. There is no rendering at all at the CAS server, all rendering takes place at the Mailbox Server role. This in contrast to Exchange 2007/2010 where all rendering took place at the Client Access Server. This can only be achieved when MAPI is not used anymore as a direct protocol. MAPI is still used by Outlook, but it is encapsulated in HTTPS traffic (also known as RPC/HTTPS). So HTTPS enters the CAS2013 server, the client is authenticated and the HTTPS traffic is redirected to the correct Mailbox Server.

Because of this the CAS2013 and MBX2013 are not tied together anymore like we saw in Exchange 2007/2010 where the CAS and HUB needed to be in the same (Active Directory) site as the Mailbox Server because of the RPC traffic.

It is now even possible to use a Client Access Server in one site while the actual mailbox is in another site. The HTTPS traffic is just redirected from this first site to the second site:

Another interesting thing in this perspective is load balancing. In Exchange 2013 all sessions to the CAS2013 are now stateless, whereas they were statefull in Exchange 2007/2010. Because of the stateless connections there’s no need for persistence (aka affinity of stickiness) anymore in the load balancer. A Layer-4 load balancing solution will now work well with Exchange 2013.

Another change in the Exchange 2013 server architecture is the absence of the RPC Endpoint. In Exchange 2010 there was the CAS Array that was the RPC Endpoint. An Outlook client had to go to this FQDN to get to the mailbox. This has changed from a FQDN to a GUID, followed by the domain name. When an Outlook client needs to access a mailbox it will query Active Directory and the GUID is returned, regardless of the Mailbox Server or the Mailbox Database. This will make life much easier when moving mailboxes, or when doing a *over in your Exchange environment. You can see this in the Outlook profile: 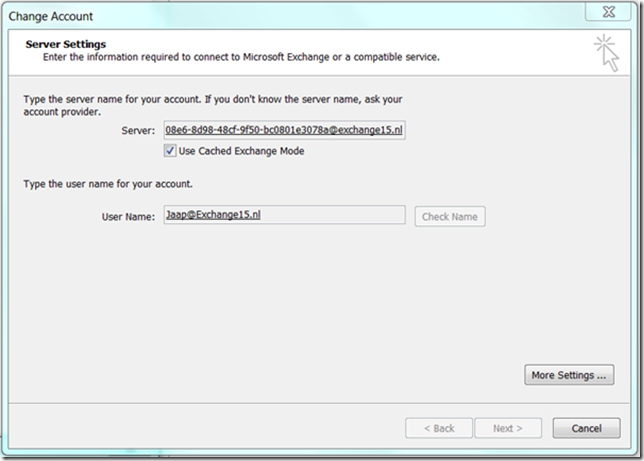 So, the changes in the Exchange 2013 infrastructure will make life much easier when it comes to namespaces, load balancers, fail-overs, move-mailboxes etc. Nice improvement!