During TechEd 2010 in Berlin Ross Smith IV from Microsoft suddenly announced that Microsoft recommends using a hardware load balancer for Exchange Server 2010 instead of using Windows Network Load Balancing. You can check the presentation online on Channel9: http://channel9.msdn.com/Events/TechEd/Europe/2010/UNC311.

NLB has some known issues when it comes to Exchange Server 2010 like scalability issues, lack of service awareness, a full reconnect of all clients when adding or removing a new NLB member and only the option of Source IP for persistence.

Hardware load balancers, or Application Delivery Controllers (ADC) as they are sometimes referred to are a much better solution for protocol load balancing in Exchange 2010. In this article I would like to spend some time on load balancing principles and in a follow up article on Kemp Technologies, a 3rd party vendor that makes Exchange Server 2010 certified load balancers. And more interesting, the Kemp load balancers are available as hardware solutions and software solutions (as a Virtual Machine).

There are quite a number of hardware load balancers for Exchange 2010 available, but most have the stigma of “very expensive” on them. That might be true (after all, some are expensive) but at the same time these solutions are targeted towards large Enterprise or Hosting environment. For the smaller and medium sized businesses Kemp offers interesting solutions starting at only € 1.900,-. For a complete overview of the Kemp load balancers check this link: http://www.kemptechnologies.com/en/loadbalancingresource/microsoft-exchange-2010.html

A hardware load balancer, or application delivery controller is basically a device that intercepts client traffic (MAPI, HTTPS, POP3/IMAP4 and SMTP) and spreads this across all Exchange 2010 Client Access Servers. 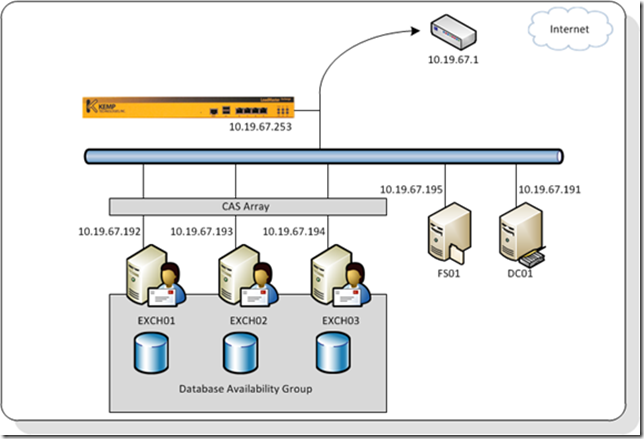 The load balancer itself can be connected in two ways:

Besides the infrastructural setup there are a few more important aspects you have to be aware off:

For this blog post I am using a Kemp hardware load balancer, a Load Master 2600. This one has a dedicated SSL chip on-board and thus can process way more SSL transactions than a virtual appliance.

Connect a monitor and USB keyboard to the device and turn it. Within seconds the system is booted and an initial wizard is shown. Here you can enter the IP configuration for Eth0 and Eth1 (when connected), enter some network information like DNS settings and domain search order and your done. As shown in Figure 1 the load balancer in our lab environment is configured in a one-arm scenario and its IP address is 10.19.67.253/24, the default gateway is 10.19.67.1.

Figure 2. Initial configuration of the LoadMaster

When done, reboot the device and you’re ready to configure the Kemp using your browser. Way easier than configuration in the initial text based interface.

The Kemp load balancer is easy to configure when using the web interface. On the left there’s the menu where you can select the options you want to configure like the Virtual Services, the Real Servers or Certificates and there’s the results pane in the middle. 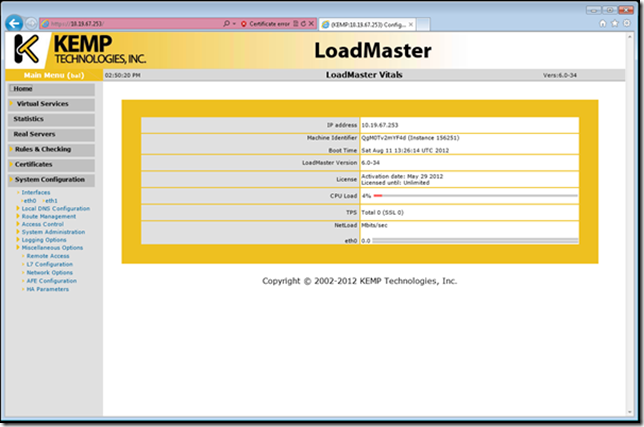 Figure 3. The main configuration page of the LoadMaster

Before creating a new Virtual Service (sometimes referred to as VIP) the three Exchange servers have to be configured correctly. On all virtual directories the internalURL and the externalURL have to be configured. In this lab environment the URL webmail.exchangelabs.nl is used, both externally and internally (split DNS). When accessing this URL it will enter the LoadMaster and then one of the three Exchange Client Access Servers. 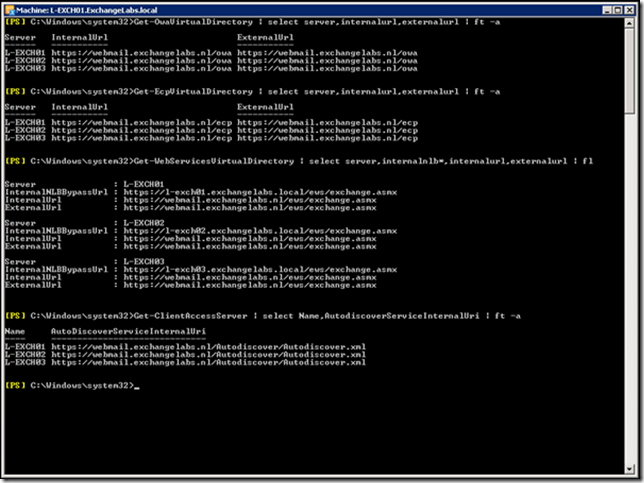 Figure 4. Some of the Exchange 2010 Virtual Directories and the (internal) Autodiscover settings

Note. Configuring the Exchange Client Access Servers need to be done very carefully. If one server is configured incorrectly you’ll face issues like not being able to connect to Exchange, or slow connections, or able to connect but not the next morning. All these kinds of strange issues, not all the time, but every now and then!

In this blog post I tried to explain some of the basics of load balancing, and in this example using a Kemp LM2600 load balancer. In the next blog I will explain how to configure this.