In this blog post we’re going to install four Exchange 2013 servers, two CAS servers and two Mailbox servers. The CAS servers are using a load balancer for protocol redundancy, the mailbox servers are configured with a DAG. Since I already blogged about the load balancers in Exchange 2010 and Exchange 2013 extensively I won’t blog about this subject again (for now that is ;-). Later on the UM role will be configured as well and connected to the Lync Server 2013 environment.

Anti-spam is performed on the Mailbox Server as well, when it comes to anti-spam nothing is performed on the Client Access Server (this in contrast as what’s mentioned on TechNet, but that’s a doc bug). If you want to perform anti-spam (actually, connection filtering!) you have to install an Exchange Server 2010 Edge Server or using Microsoft Forefront Online Protection.

Exchange Server 2013 needs the .NET Framework 4.5 and the Management Framework 3.0. Both are part of Windows Server 2013 so we’re fine here.

The first Exchange 2013 server to be installed is the Mailbox server, this is where all the logic resides so this is also the most important server where all processing takes place. This server also needs the Remote Administration Tools (also includes LDIFDE), needed for making all the changes to Active Directory. Open a Powershell window on the first mailbox server and enter the following command:

Exchange server 2013 makes extensive use of the HTTP protocol so quite a lot of Internet Information Server (IIS) need to be installed as well. For a dedicated Exchange 2013 mailbox server (or a combined CAS & MBX server) enter the following command in a Powershell window:

After rebooting the server install the following additional software:

The server is now ready to install the Exchange Server 2013 Mailbox server.

It is possible to use the graphical setup, but I prefer to use the unattended setup. This gives a lot of flexibility, a step-by-step approach when preparing Active Directory and when installing multiple servers you get a consistent setup.

To prepare the schema for Exchange server 2013 logon as an enterprise administrator (make sure you’re a member of the Schema Admins for step 1 as well) open a command prompt, navigate to the installation media and enter the following command: 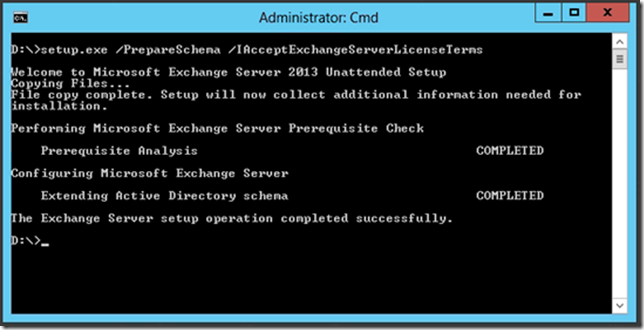 To prepare Active Directory for Exchange server 2013 enter the following command in the command prompt:

The last step is to prepare the domain, do this by entering the following command on the command prompt:

When replication has completed between all domain controllers the actual Exchange server can be installed.

Logon to the new server as an Enterprise Administrator, open a command prompt, navigate to the installation media and enter the following command:

This will install the Mailbox server, create a new Mailbox database called DB01 and the database and log files will be located on drive F: (this disk needs to be created and configured in advance of course). Beware, installing Exchange Server 2013 can take a considerable amount of time! When the Exchange 2013 software is installed reboot the server.