During the upgrade of the Mailbox servers users were presented with the dreaded “The Microsoft Exchange administrator has made a change that requires you quit and restart Outlook.” dialog box.

This is expected behavior when moving from Outlook Anywhere to MapiHttp (since the Outlook profile needs to be updated for this change to take effect) but in this scenario MapiHttp was disabled. The message popped up totally unexpected. The bad thing is, it popped up every 10 minutes or so.

Microsoft has experienced similar issues when Mailboxes are moved from Exchange 2010 to Exchange 2013 as described in this knowledgebase article.

In my scenario Mailboxes were moved from Exchange 2010 to Exchange 2013, but this was somewhere between 9 and 12 months ago. And the platform has been pretty stable so far. In this knowledge Microsoft recommends repairing the Outlook profile or recreate the Outlook profile. Not a big deal for a few users, but when running a platform with multiple thousands Mailboxes this is not an option.

According to this TechNet article on RPC End Points this issue shouldn’t popup in Exchange 2013 at all: http://bit.ly/RPCEndPoint- Outlook, RPC end point and PF : The Microsoft Exchange Administrator has made a change that requires you quit and restart Outlook

Some more digging in the eventlog on the Mailbox server however revealed a warning with Event ID 2937 (MSExchange ADAccess) saying a cross reference to a Public Folder database points to the Deleted Objects container in Active Directory: 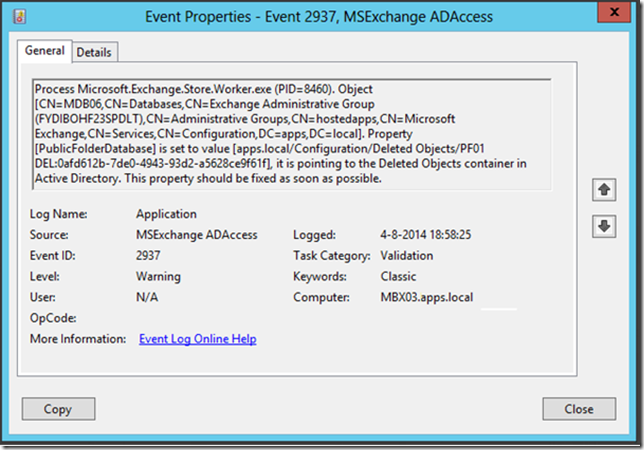 When checking the properties of a Mailbox database with ADSI Edit the MsExchHomePublicMDB property is populated with a Public Folder reference, but since the Public Folder database is decommissioned it points to the Deleted Objects container:

Use the Edit button to clear the reference from this property, restart the Information Store (or do a Database failover in the DAG) and the the popup never shows up again.

There are two questions here:

7 thoughts on “The Microsoft Exchange administrator has made a change…”