it was already announced on the Microsoft blogpost New minimum Outlook for Windows version requirements for Microsoft 365, Microsoft will stop support for older Outlook clients on November 1, 2021 (which is 24 days from the time of writing!).

In short, all clients older than Outlook 2013 SP1 with the latest fixes are no longer able to connect to Exchange Online. And yes, this includes Outlook 2010 (I know there are still clients out there running Office 2010!).

More detailed version numbers of Outlook that will not connect anymore:

Please be aware that this is completely independent from the Basic Authentication strategy that Microsoft is following. Older versions will just stop connecting to Exchange Online.

For more information, check MC288472 in the Microsoft 365 Message Center. 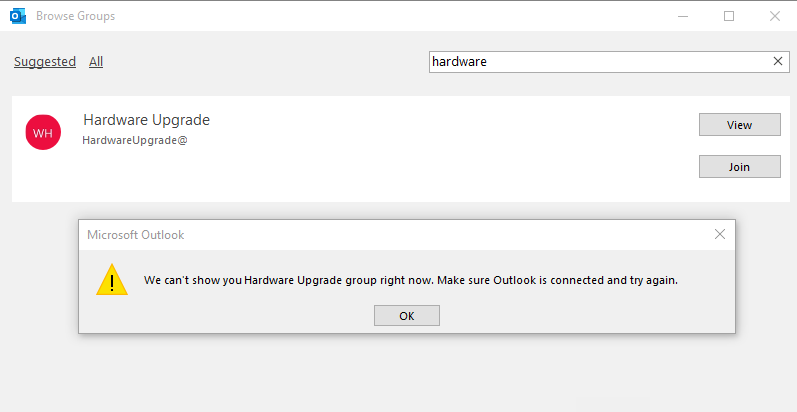 I am using Office 365 ProPlus Click-to-Run which checks Exchange Online first for Autodiscover purposes, but then I realized I had been experimenting with some registry keys to change Autodiscover behavior. When checking the registry, I found the ExcludeExplicitO365Endpoint DWORD set to 1 as shown in the following screenshot: 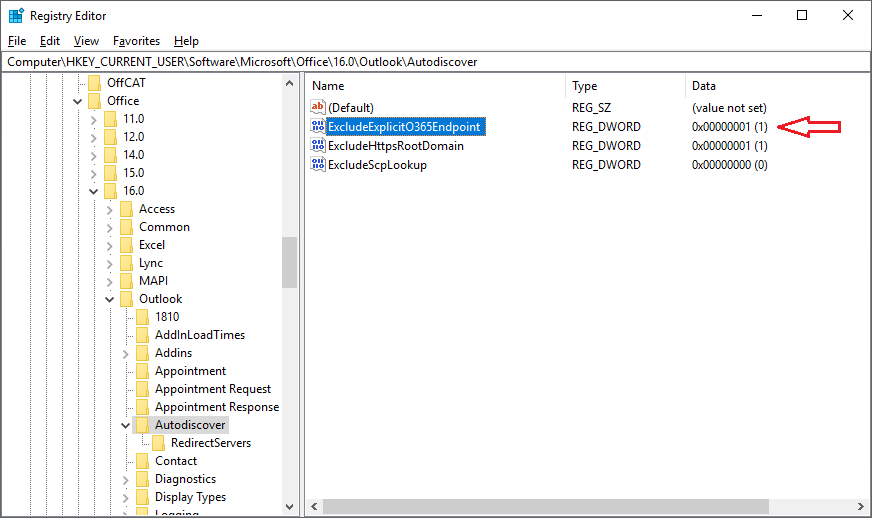 Or when you want to add the SMTP address as a secondary address:

This should also solve the problem.

In this blogpost I’ll try to dive a bit deeper into authentication and explain what is going to happen.

Basic Authentication is one of the oldest ways of authenticating in any web application. You access an application, a dialog box is presented, you enter your credentials and the credentials are sent (in clear text) across the wire. To improve security typically an SSL connection is used, so the connection between the client and the server is encrypted. 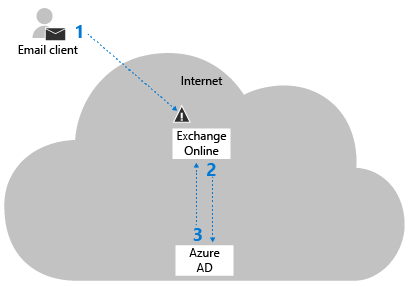 When using ADFS, basic authentication is not very different. The client authenticates and sends the credentials in clear text to Exchange Online, and Exchange Online takes care of the remaining communication using ADFS and the on-premises Domain Controllers (step 2 and 3 in the following screenshot): 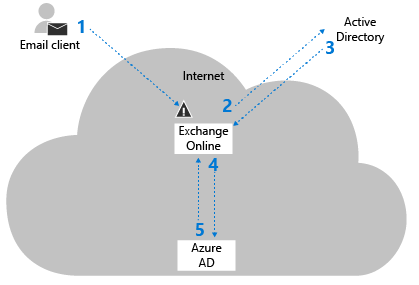 Important to note is that the client here still use basic authentication.

I leave it up to your imagination what will happen when Microsoft stops support for basic authentication (step 1 in the screenshots above) this October!

Modern authentication is a token-based authentication mechanism and as such it has similarities with federation services. On IT Dev Connections 2017 in San Francisco I did a presentation on this subject. The following screenshot is an animated slide from the presentation showing the authentication flow between a client, Exchange Online, Azure AD and the on-premises Domain Controller: 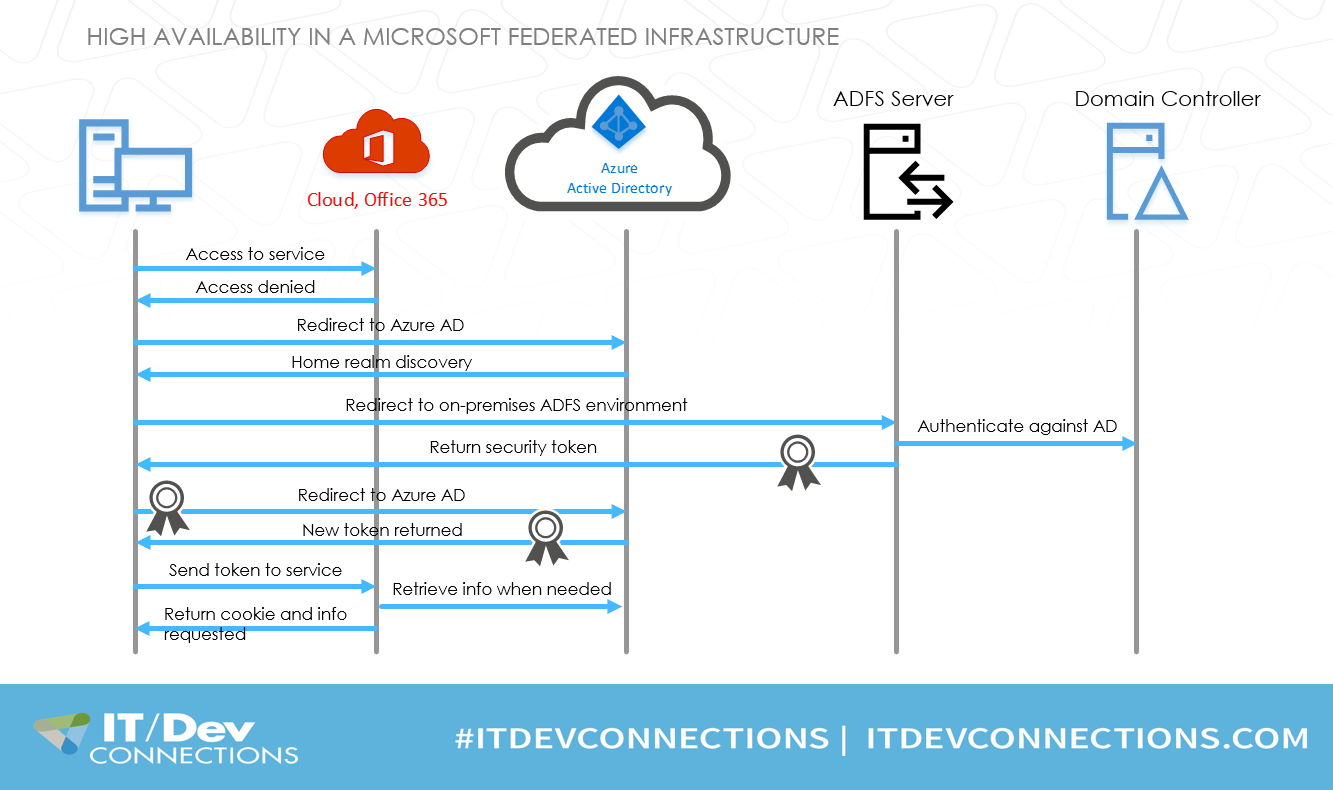 Modern Authentication is based on the OAuth2 framework. When using OAuth2, you grant permissions to an application (‘consent’) to contact the server on your behalf. The client contacts the server the first time and you enter your credentials in a web frame, this is a server-based web frame and when the credentials are entered two tokens are generated:

This is shown in the following image: 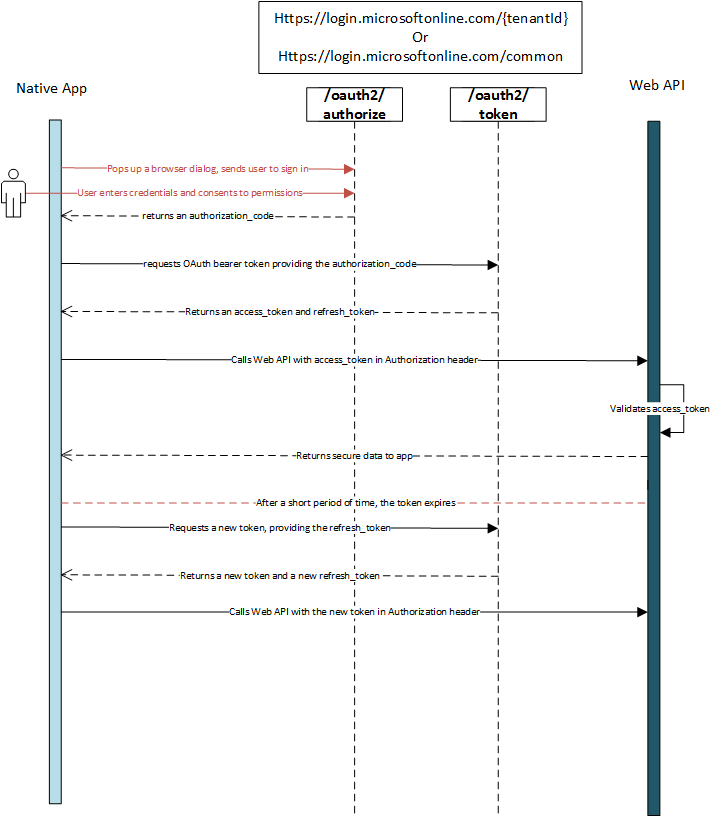 The way to identify if you are using modern authentication is the HTML based login screen which look like this: 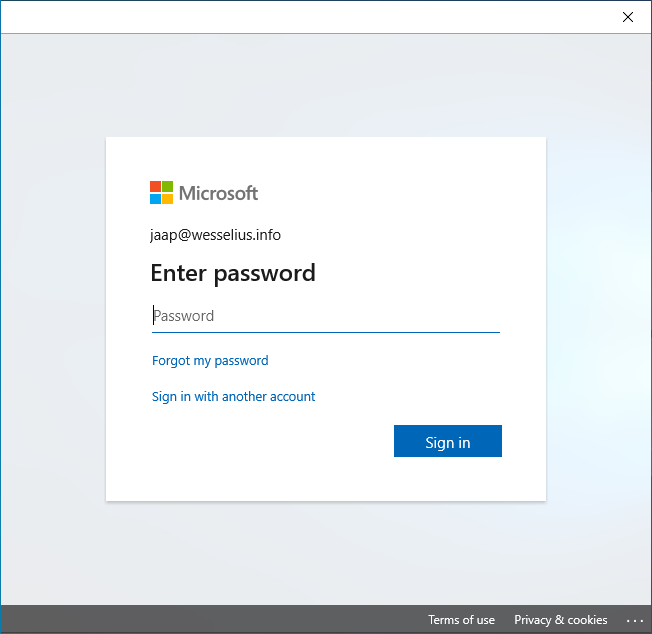 While the basic authentication (in Exchange 2016, but similar in Outlook 2010) looks like: 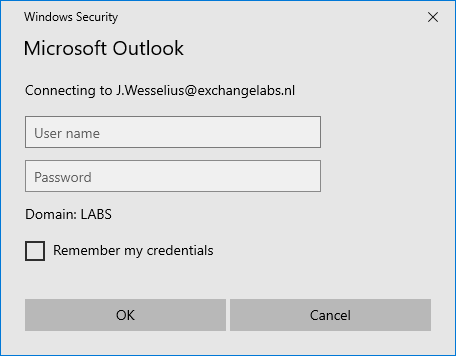 Another way to identify Modern Authentication is to use the connection status in Outlook:

When you see ‘Bearer’ (coming from OAuth bearer token) Outlook is using Modern Authentication, if you see ‘Clear’ then basic authentication is used by Outlook.

Outlook clients get their configuration information using the Autodiscover protocol from the Exchange server where their mailbox resides and the underlying Active Directory. This works fine, until you are in an interorg migration scenario using the Quest Migration Manager (QMM) for Exchange.

When using Microsoft tools (ADMT, Prepare-MoveRequest.ps1 and New-MoveRequest) the source Mailbox in Exchange is converted to a Mail-Enabled user at the moment of migration finalization. At the same moment the Mail-Enabled User property targetAddress is stamped with the SMTP address of the Mailbox in the new forest. SMTP works fine now, and also Autodiscover will follow the SMTP domain that’s in the targetAddress property. This is true for an interorg migration on-premises, but it is also true when moving Mailboxes from Exchange on-premises to Exchange Online in a hybrid scenario.

When using Quest tooling things are a bit different. The source Mailbox is not converted to a Mail-Enabled User, but it continues to exist at a regular Mailbox. The Outlook profile on the desktop is converted using the CPUU tool using local Autodiscover.xml files so that the Outlook client no longer connects to the old Mailbox but to the new Mailbox.

This works fine for the existing client, but when a user gets a new laptop, or has to configure the Outlook profile again, Outlook will use the Autodiscover process and thus connect to the old Mailbox. Since this isn’t converted to a Mail-Enabled User, Outlook will find the (old) Mailbox, it will stop searching (and thus will not follow the targetAddress property) and return the configuration information for the old Mailbox.

The -MultiplExchangeDeployments options should be set to $true since both forests contain an Exchange organization.

The Exchange Management Shell does not report anything back, so no need to show it here 😊

When we look in the AD Configuration container we can now see two SCP records: 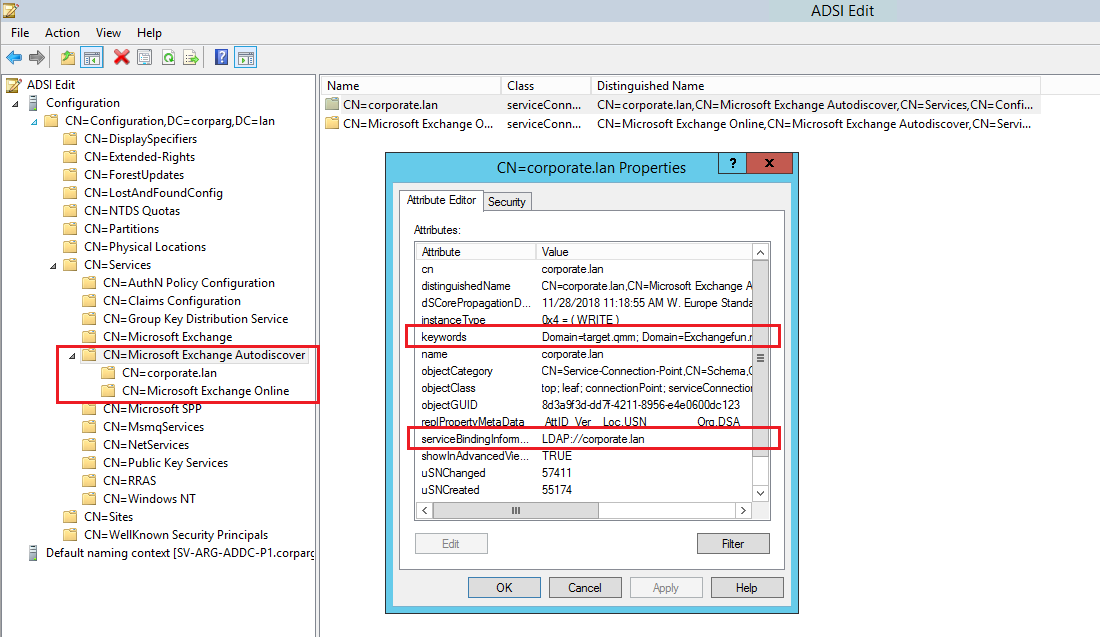 The serviceBindingInformation property contain an LDAP link to the Exchange 2016 forest where Outlook clients can find information from the migrated Mailboxes.

To achieve this, create a Universal Security Group with a name like “Migrated_Users”, remove the Authenticated Users group from the exported SCP and grant the Migrated_Users Security Group Read permissions on this object as shown in the following screen shot: 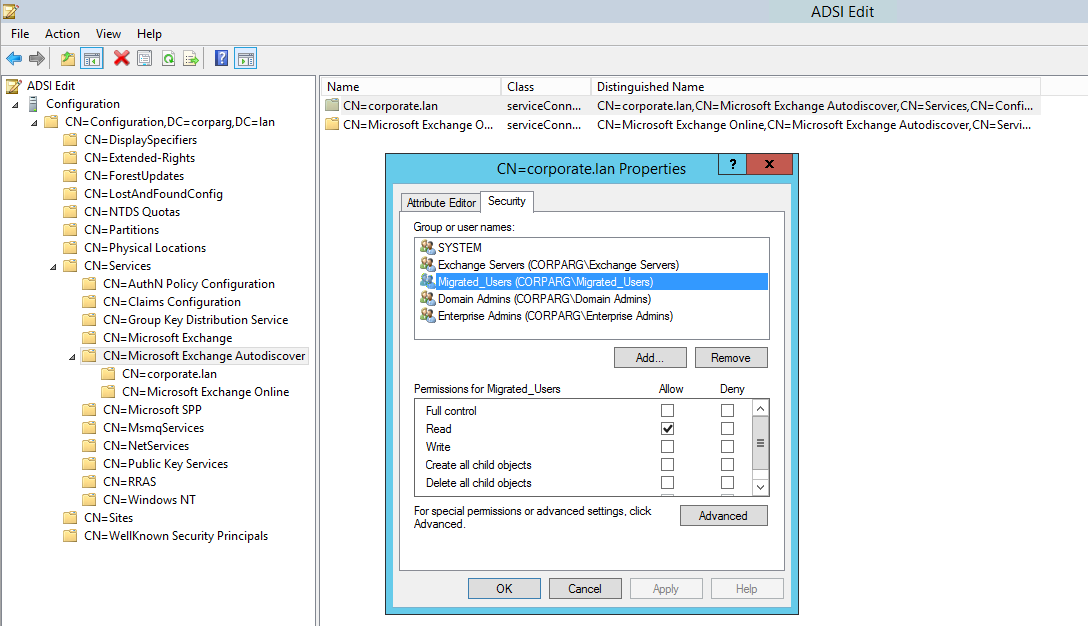 At the same time we have to grant an explicit deny Read permission to the Migrated_Users Security Group on the original SCP record as shown in the following screenshot: 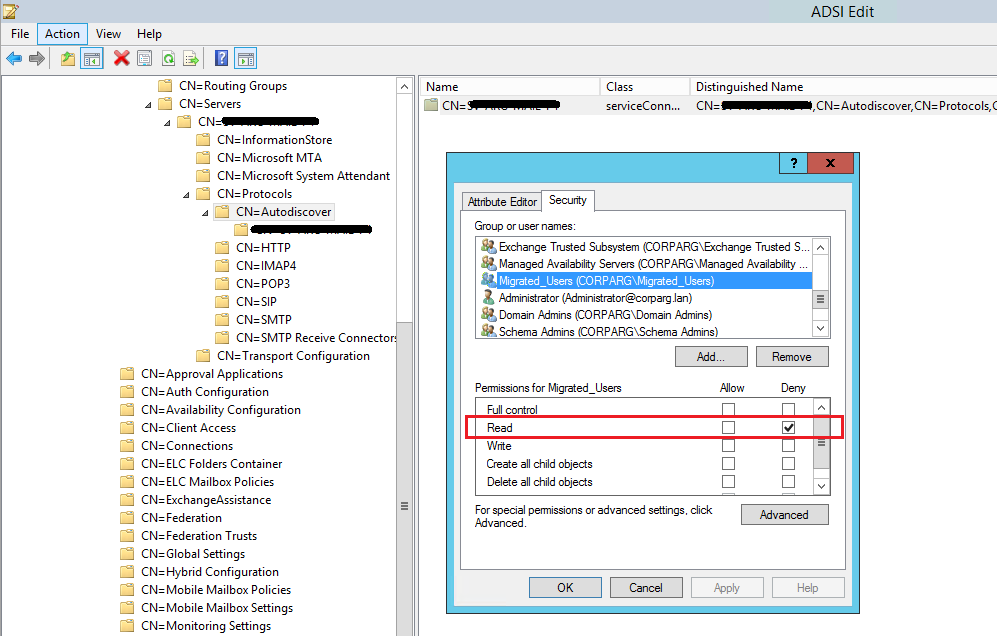 Now when a Mailbox is migrated using QMM and the CPUU tool, add the user to the Migrated_Users Security Group. At this moment its Outlook client will no longer find the original (Exchange 2013) SCP record but the exported SCP record. Outlook will then connect to the target Active Directory forest with Exchange 2016 and retrieve the correct information.

Note. It took us quite some time when testing this scenario with different versions of Outlook (2010, 2013 and 2016) but the scenario explained here turned out to be working fine with these versions. But please test in your own test environment with various clients as well.

The reason for this is Outlook and the Service Connection Point (SCP) in Active Directory. Somewhere during the installation process a new SCP is created in Active Directory, but when created it is not configured and points to the FQDN of the Exchange server instead of the more general Autodiscover.contoso.com/Autodiscover/Autodiscover.xml URL. When an Outlook client accidentally discovers this unconfigured SCP it will try to connect to the new server instead of the Autodiscover FQDN which will result in a certificate warning message similar to the following: 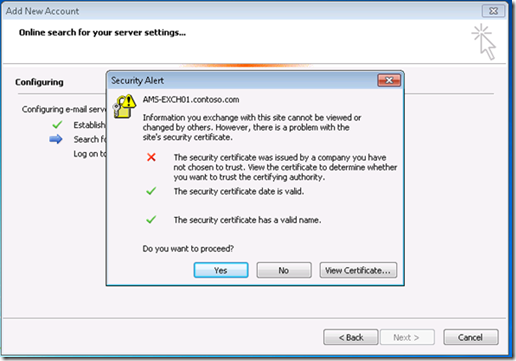 To avoid this, the SCP should be configured as soon as it is created in Active Directory (and this is during setup itself).

Tony Murray, also an MVP, has written a PowerShell script (Set-AutodiscoverSCPValue.ps1) that will check the existence of the Exchange server object in Active Directory, and when it is created by the Exchange setup application, it immediately sets the correct Autodiscover value in its SCP.

When you run the script it will check every 5 seconds (time is configurable) for the newly created server object, and when it finds it, it will set the correct value as shown in the following screenshot:

From this moment on Outlook client can safely discover this SCP record, and it will be automatically connected to the correct Autodiscover URL and therefore the SSL Certificate warning will not appear (assuming the original servers are configured correctly of course).