More information regarding the lifecycle of Exchange 2013 can be found here: http://bit.ly/2013LifeCycle

Besides a large number of hotfixes, Exchange 2013 SP1 contains a number of new and interesting features.

More features in SP1 include….

I’d like to show a bit more on a few of these features….

OWA in Exchange 2013 SP1 now has a rich text editor and this is really cool. You can now format new messages, copy-and-paste formatted text from other sources and even copy-and-paste images into OWA:

This is really a cool feature and makes OWA definitely more useful than ever.

If you have any UM Language packs installed you have to remove these first before upgrading to Exchange 2013 SP1. To do this you have to use the unattended setup:

Once removed you can continue upgrading to SP1.

Exchange 2013 SP1 contains schema changes. To upgrade the Schema to SP1 you can execute the following command:

If you want to check the Schema version you can use the following PowerShell commands:

Upgrading to SP1 is very straightforward. Open a command prompt and enter the following command:

There have been reports that the Front-End Transport Service (FETS) was running but unwilling to accept new connections after an upgrade. Rebooting the server solves this issue, but it’s my personal best practice to reboot the server anyway.

The process is as follows:

Note. If you’re running a DAG most likely you will have multiple Exchange Server 2013 Client Access servers as well, or maybe you have both roles on the same server. Either way, the Client Access server needs to be disabled in the load balancers as well of course as shown in the following figure where the EXCH02 Real Server is disabled (and therefore not servicing any client requests). 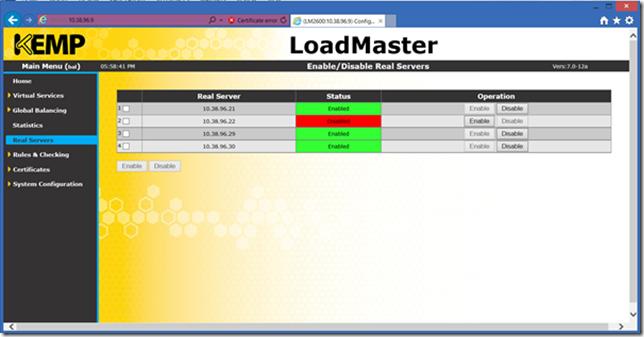 To put a DAG member in Maintenance Mode open the Exchange Management Shell, navigate to the $Exscripts directory and enter the StartDAGServerMaintenance.ps1 -Server <<servername>> command.

Now install the SP1 binaries as explained before. Once installed the DAG member can be taken out of Maintenance Mode. Open the Exchange Management Shell and enter the StopDAGServerMaintenance.ps1 -Server <<servername>> command from the $Exscripts directory.

Repeat these steps for the other DAG members and if you’re running multi-role servers, don’t forget to enable/disable the Real Servers at the same time.

The last step is to redistribute the Mailbox database across the DAG. You can use the RedistributeActiveDatabases.ps1 script in the $Exscripts directory to do this:

Exchange 2013 SP1 brings a a lot of new features and I’ve highlighted a couple of these here. Upgrading from a previous CU to SP1 is fairly straightfoward. To prevent issues like services not accepting new connections reboot the server after upgrading to SP1.

The upcoming weeks I’ll blog a bit more about new features in SP1.